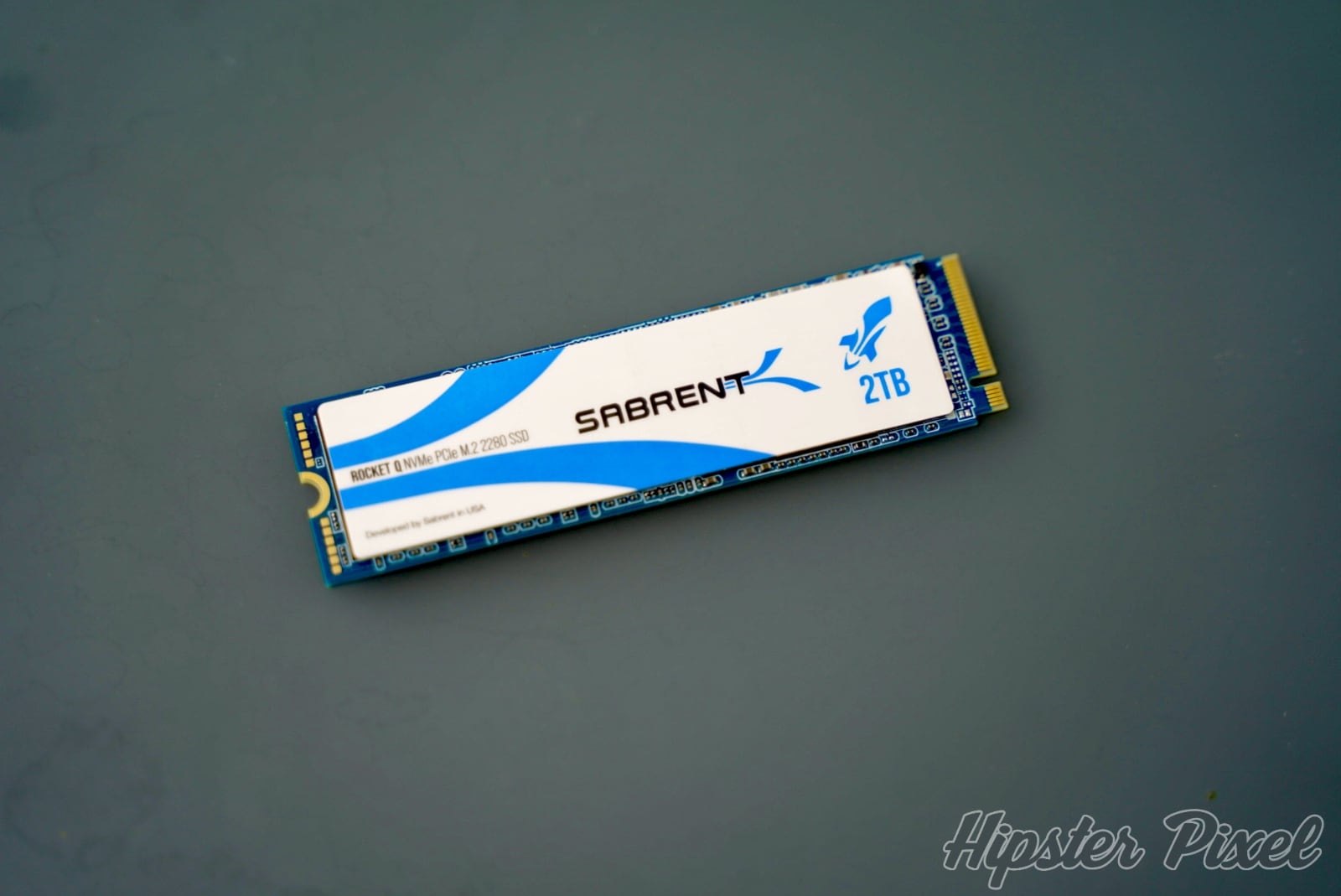 After testing a few of the new generation of smaller size SSD like the Rocket Nano and the Tuff Nano, I was wondering if I could get even more performance out of a stick of NVMe SSD using an external enclosure. After all, the Thunderbolt 3 architecture should, in theory, allow for 40Gbits of bandwidth. This is 5 GB/s of theoretical transfer rate.

I contacted my good friends at Sabrent and got to test the Rocket Q , one of their faster NVMe 2280 SSD, a little stick that can be used inside their Tool-Free enclosure which I really loved the design, or inside any other enclosure of your choosing.

This is one area where the SSD drives are way faster than any enclosure can keep up. Therefore, I’ve been trying to get one that is much faster than the Rocket Q, and sadly, failed to find one. I did find one that is good, but not as fast as I would hope it would be.

There is not much to say about an NVMe SSD stick, it’s a small piece of PCB with memory chips on it. It stores data. Period. ;)

NVMe comes in various sizes, this one happens to be the M.2 2280 one which is the most common, and also one of the smallest. Perfect for small external devices like enclosures.

It took a long time for me to put this drive through its paces. I’ve tested a few external enclosures including Sabrent’s own Tool-free enclosure, but sadly it seems the market is not ready for such tremendous power.

There are a few enclosures on Amazon that are rated to surpass 2 GB/s, but they don’t really advertise their maximum theoretical speed. Often they just take a Western Digital or Samsung NVMe drive and provide these numbers. Nonetheless, here are a few drives to consider:

As you can see, these reported speeds are all over the place. All of these are supporting Thunderbolt 3 with 40 Gbit/s, but none of them seem to go over 3 GB/s when the maximum speed should be around 5 GB/s. So I ended up selecting the Fledging Shell Thunder for this review because it seemed to be the most rounded one with the fastest read speed and a very fast write speed.

You have to know that the Sabrent Rocket Q is rated for speeds of 3,200 MB/s (read) and 2,900 MB/s (write) and none of the above reach the speeds of the Rocket Q sadly.

Installing the Rocket Q inside the enclosure is not a challenge at all, just 4 simple screws and a stick of thermal pad. That is really all there is to it. The Sabrent Tool-less enclosure is faster, but unless you are going through SSDs like crazy 4 screws is not such a hard process either.

Here I would have loved to be able to reach the full potential of the Rocket Q , however, sadly it is not possible with the current Thunderbolt 3 enclosures on the market. The Fledging officially supports 2,900 MB/ in read and 2,500 MB/s in write as its top speed. Here are the numbers I got going through the various benchmarking software.

I have also moved very large files in one single stream in order to trigger the SLC cache limit. The SLC cache limit is a superfast cache that is used to offer the best performance and then when the transfer is completed, it is offloaded to slower memory banks. Often time this limit is between 20 GB and 70 GB, this is why I did two tests. Moving a file of 90 GB and moving another file of 120 GB.

In both situations, I did not hit any limit at all! Granted, I did not reach the SSD’s maximum speed, but I still nonetheless made a very large transfer that would have filled the cache if there is, was one. ~In a perfect world, I would move a full 2 TB of data like this, but I never saw someone actually do this… It would be an interesting test, though!~ Scroll down a bit to the next section! ;)

As you can see from the above file transfer, recorded with iStat Menu, it kept its maximum transfer speed of roughly 2.1 GB/s constant. There was a very slight dip, but nothing to phone home about. This tells us that the full (or a significant portion) of the memory banks are of the very fast kind. In real life scenarios, even for backup purposes, you should have no trouble getting the maximum speed of this drive without any slow downs!

My job is to push my hardware to the limits, so I generated an empty file (random ones and zeros) of 1TB. If there is an SLC cache on the Sabrent Q, we will surely find out! I used the same process as above, writing the file to the SSD installed in the Fledging enclosure. Just look at this beauty:

Quite impressive! As you can see from the graph, apart from a very small hiccup in the first few seconds, the Rocket Q sustained 2.1GB/s of file transfer speed for the whole transfer! We can safely say that the Rocket Q does not have any SLC cache, and the complete space on the SSD is made up of superfast memory chips!

Not being the first product of Sabrent I’m testing, I was under the impression that it would be quite fast and indeed, fast it is! The advertised speeds are not only for the first X gigabytes, they are reached for as long as a file is being transferred and this is marvellous for those of you out there moving large number of files. Bet it for backup purpose, or do read and write your 4K (and even 8K) video edits directly on the Sabrent Q SSD!

If for some reason, speeds of 3GB/s are not enough for you, Sabrent recently released a new product, the Rocket Q4 which comes with or without a heat sink, allowing it to reach speeds of up to 5,000 MB/s in reads and 4,400 MB/s in writes. You do need a PCIe Gen4 compatible motherboard, but like Sulu would say… OH MY! This is truly impressive speeds!

The Rocket Q is a very nice balance of power and affordability that offer performances usually reserved to much pricier products and if you register the product quickly, you get a 5-year extended warranty! I highly recommend the Rocket Q and if you end up getting the new Rocket Q4 let me know, I would love to know what you think!

A tiny but mighty fast m.2 NVMe SSD, the Rocket Q strives to offer over 3 GB/s of file transfer speeds while offering a price you can actually afford!

The Good Stuff The Bad Stuff
The Ratings
Design
90%
Performance
90%
Heat Management
90%
Price
80%
Overall: 83%
Disclaimers: This product or service was provided by the company or partner for the purpose of this review.
For more information on how we score products, please read how we review products.
Airthings Wave Plus Review, Air Quality and Radon Monitor [Review]
Airthings Adds Mold Risk Indication to Wave Mini