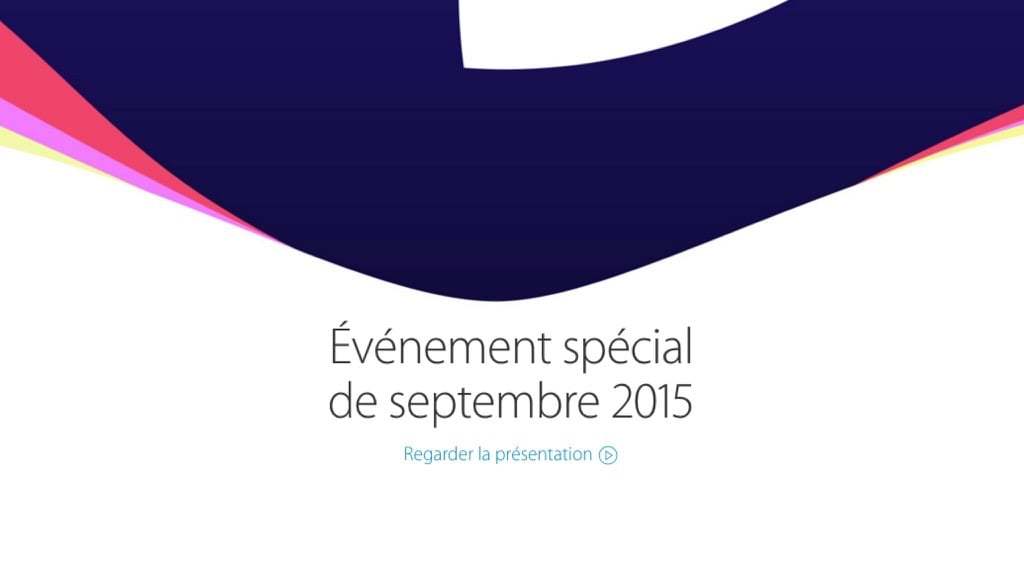 It really was quite a conference yesterday. I’ve been following those religiously since 2008 when I got my first Mac and I must say that for a toc upgrade the iPhone 6S feels much more that what the 3GS, 4S or 5S were. And all the rest was quite an update too!

We seem to be back on track with a timely, almost down to the second programming of the different slides, participants. Quite refreshing as I really did not like the  Music event this summer. The flow was great yesterday and everything seemed planned properly.

This is surprisingly the product I’m more excited about! I mean it’s a great upgrade, but after thinking about how I consume most of my movies and TV shows, its new App Store features enables me to completely ditch my Chromebox converted to Kodi mini-PC! No need for Roku for streaming and no need for Kodi for files hosted on my NAS. How? Infuse, the makers of the great iOS apps have already started to work on an  TV version of their famous app!

They are the ones behind the jailbreak of the first two generation  TV and now because of the  TV App Store we can look for much of the features right from their app. Or perhaps apps if they see it capable of making more of their magic!

When I got my first iPhone, I was able to remove an old Zune from my life and converge to a single device for all of my on the go media consumption. The new  TV will do the same with my TV and I can tell you my wife will be happy to see two devices go away! :)

I still need to comprehend all the advanced features of the new remote. I get it that it has a touchpad, but glass on a remote? I’m a bit scared with my kids constantly dropping the remote of our current gen.  TV. Talking about remote, we lost it this week. Perhaps for good… Also, it has an IR beamer, so will it be able to “learn” new tricks and control my LG TV? And of course, this is just the tvOS 1.0, so expect Apple to come out with more frequent and feature-full updates. After all, TV is now in a prime spot on the Apple navigation.

This was highly expected after all the rumours but in the end even if we knew a lot of the details, Apple presented the device and is accessories in a way that still was interesting to watch. We now have the hardware, and powerful A9X and 4GB of memory, to kickstart pro tactile applications. Think of Photoshop, Premiere, Audition, Final Cut and Logic, all touch optimized. Lots of potential, but first we needed a good hardware platform. We now have it and it looks pretty! Watch out Wacom, your Cintiq Companion and the Microsoft Surface have real competition here!

I’m not sure the iPad Pro would fit as a “couch” iPad due to its size but for anybody that want to switch from a laptop to an iPad, it seems to be the ideal device for this purpose! The keyboard looks great with real keys, not touch keys like the Surface Touch Keyboard and Apple still managed to make it fit inside a, somewhat bulky, Smart Cover.

For me iPad Pro is power and versatility in one.

New camera and new sensor technology, still making better and better photos. Looking forward to this as we can always have a better camera. The new Touch ID sensor is welcomed. Not that the first gen. was slow, but sometimes it could benefit from a small speed increase. It should now have it. With all the new cellular antennas supported, we can only guess it’s a new generation of wireless chip and perhaps that is why the battery can be slightly smaller with the same number of hours of use per charge.

The Force Touch, now branded 3D Touch enables a quick look and a deep press to get some more contextual information and access quick actions. Like a quick shortcut to get to the selfie camera or peek what’s inside a folder quickly. I can’t say anything about these as you have to try them for a while before being able to give a conclusion. I’m hopeful developers don’t keep hiding stuff in there and make their app harder to use.

The Live Photos is quite something. Especially since Apple seam to have included this inside the JPEG image we already know and love. Very curious to see how the pulled this off! The new 4K video capture is very nice and will be amazing for people filming with iPhones. And actually making crazy rock solid stabilization while croping 1080p from 4K video.

Really feels like an iPhone 7 and not and iPhone 6S ;)