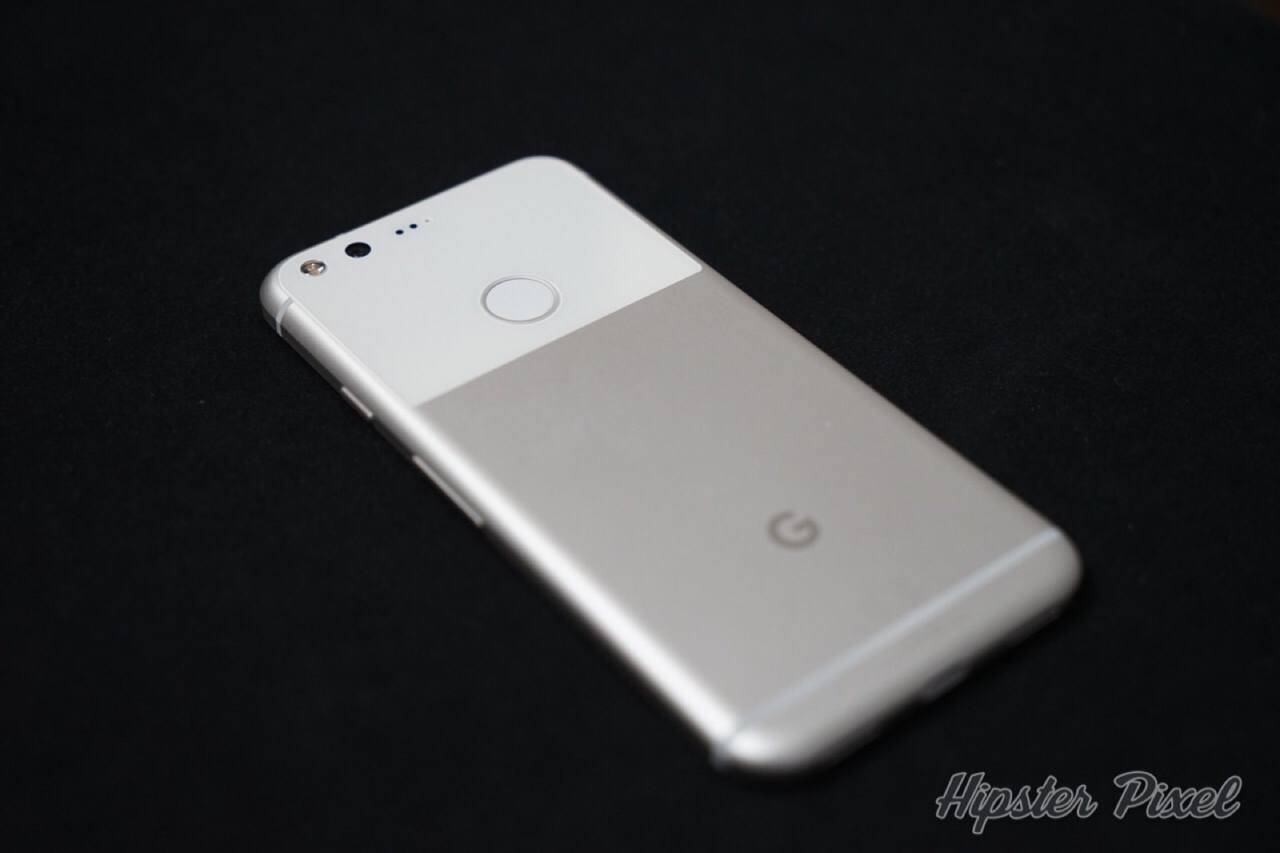 This year, we were up for a great surprise. Google, famous maker of the Android operating system and long-time partner of manufacturers to build reference hardware for its ecosystem, went lone wolf and announced two brand new devices Made by Google! The Google Pixel and Pixel XL are two brand new devices packed with new hardware and novel software ideas to leverage all the good things Google integrated into Android 7.1.

Are the Pixels replacements for the Nexus line of products? Yes, but I consider them a refinement and a major evolution on both quality and design.

Google tried something original this year, they used a different shape and they mixed materials in a way that was not tried in the past. The Pixel and Pixel XL are both wedge shape, slightly thicker around the top. Unless somebody points it out, you do not see it and it does not feel like it’s unbalanced when holding it. If that’s what we need to remove the camera bump, I’m glad Google did it! It really gives us a much nicer back, flat and minimalist. 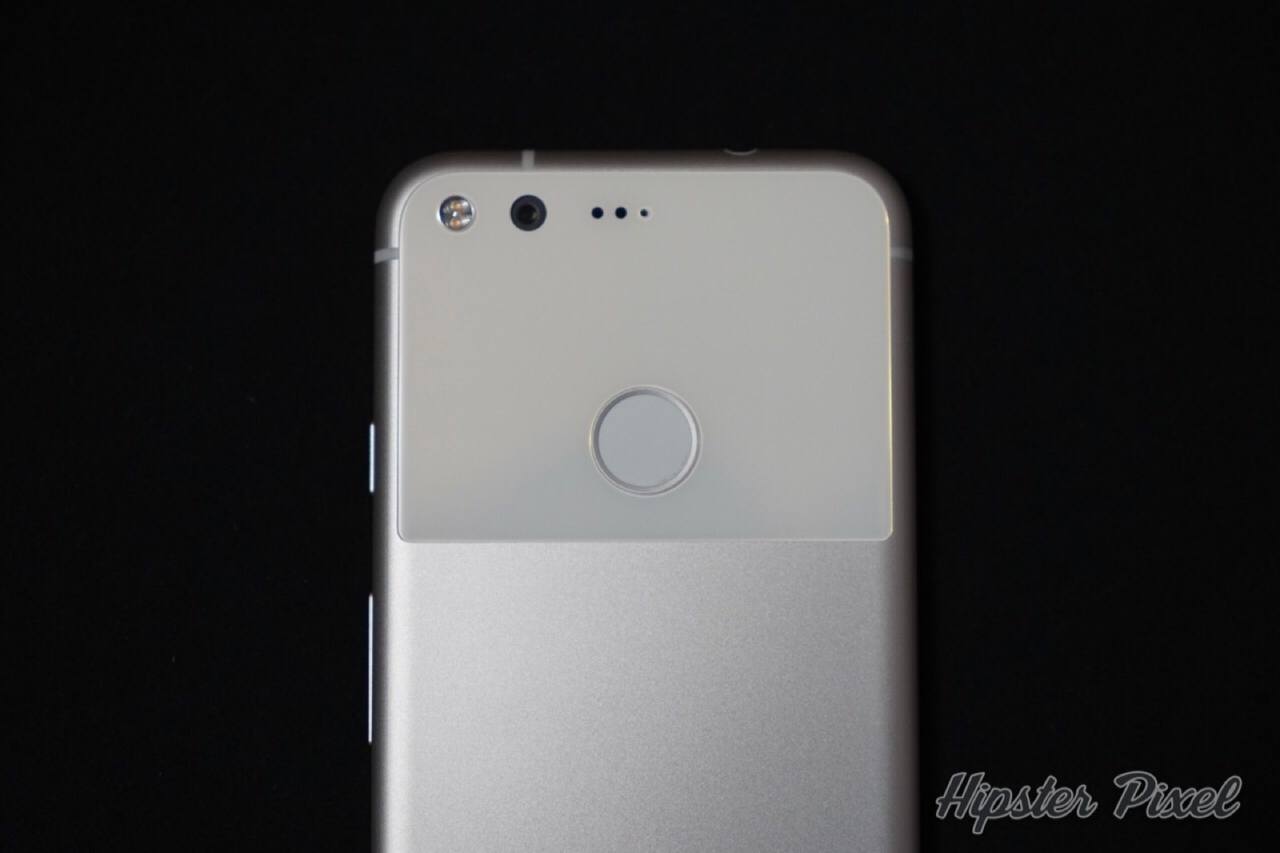 The choice of going with a metal body and the top back square part is made of glass. A choice that was criticized by other reviewers and analysts. Personnaly, I love the look of glass phone but not the practicality, and danger of shattering. However, by using only part of the back, you do get the looks while minimalizing the shattering posibility. Also, it let’s the cellular and Wi-Fi waves through. Talking about antennas, the antenna bands on the bottom really reminds the iPhone 6/6S and 7. Google also decided to go with a chamfered edge, but unlike Samsung, they did not balantly copied the iPhone 5/5S. The edge has roughness to it that helps with grippiness and it looks good. 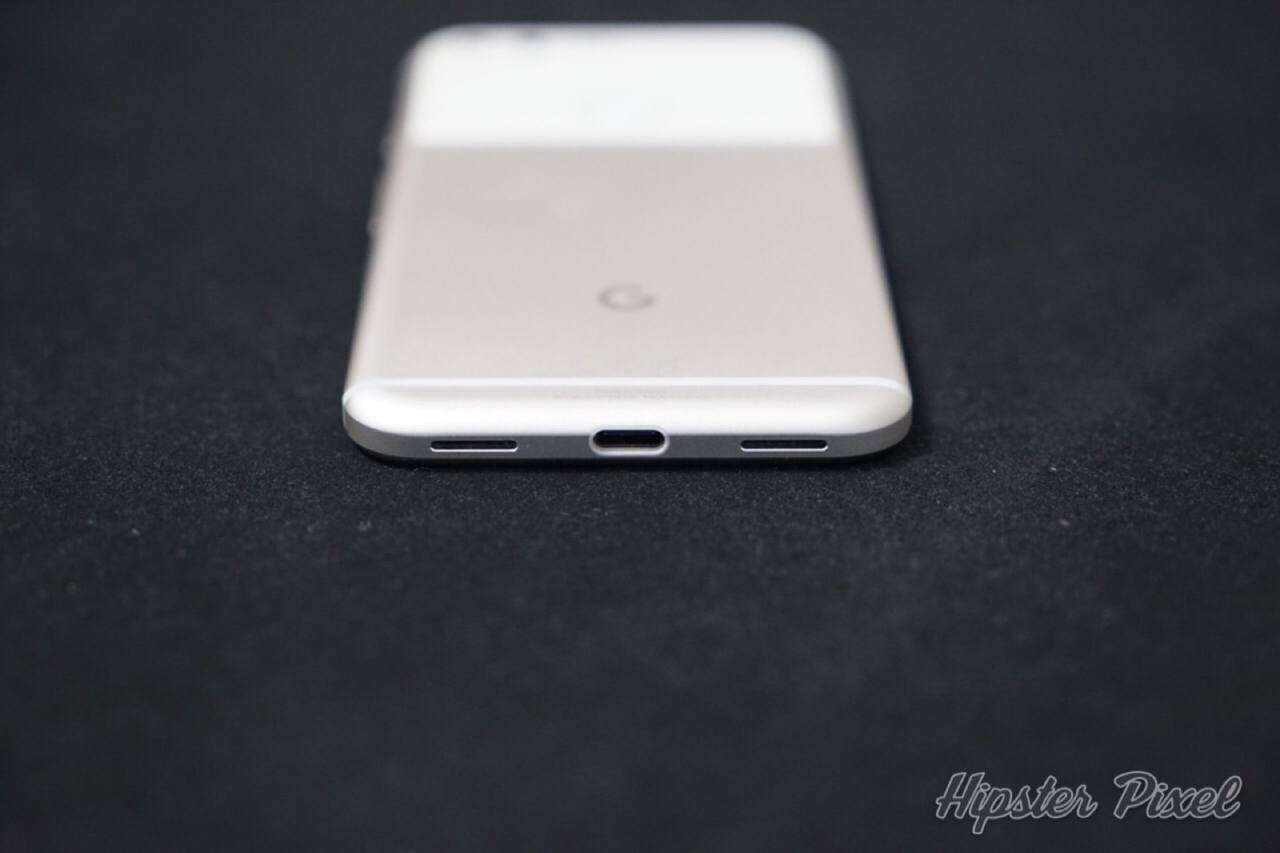 Google decided to keep the 3.5mm jack, which is positionned on the top of the device. The speaker grills and the USB-C connectors are on the bottom of the device. Both placement are hurting my eyes as Google decided that these holes will not be centered. The 3.5mm seems very peculiar as it’s drilled on both the flat edge and the bezeled edge. The bottom USB-C is a little bit less apparent, but stil gets me all fired up as the rest of the device has so much care applied to its design. When you start looking into this, you also realize the the front facing sensors embedded in the forehead of the front glass are also very apparent on the black model most of all. You do not see this happen on the front of iPhones, so there must be a way to hide it. 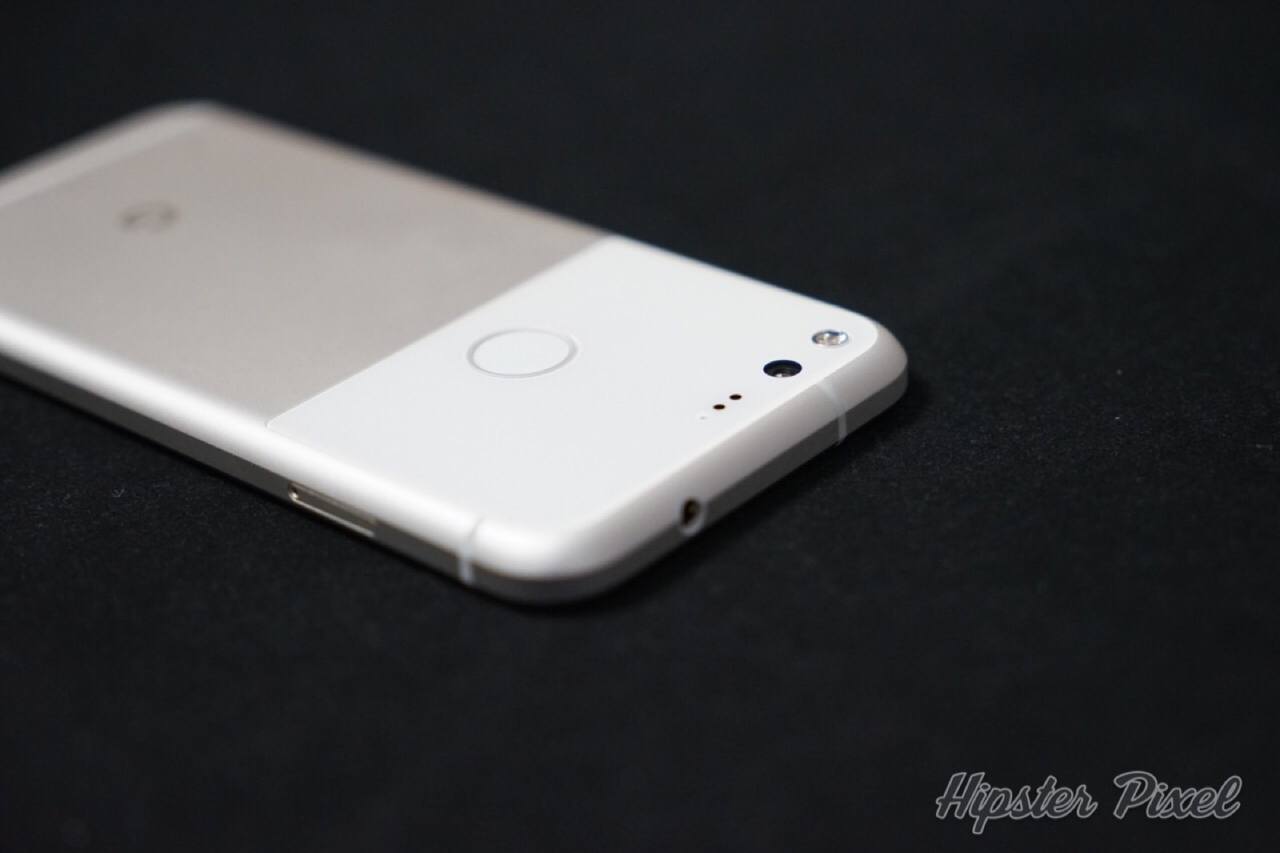 Google included a special USB-C to USB-A dongle to make the transfer process from an iPhone to the Pixel as painless as possible. And I found it efficient and with just enough details. 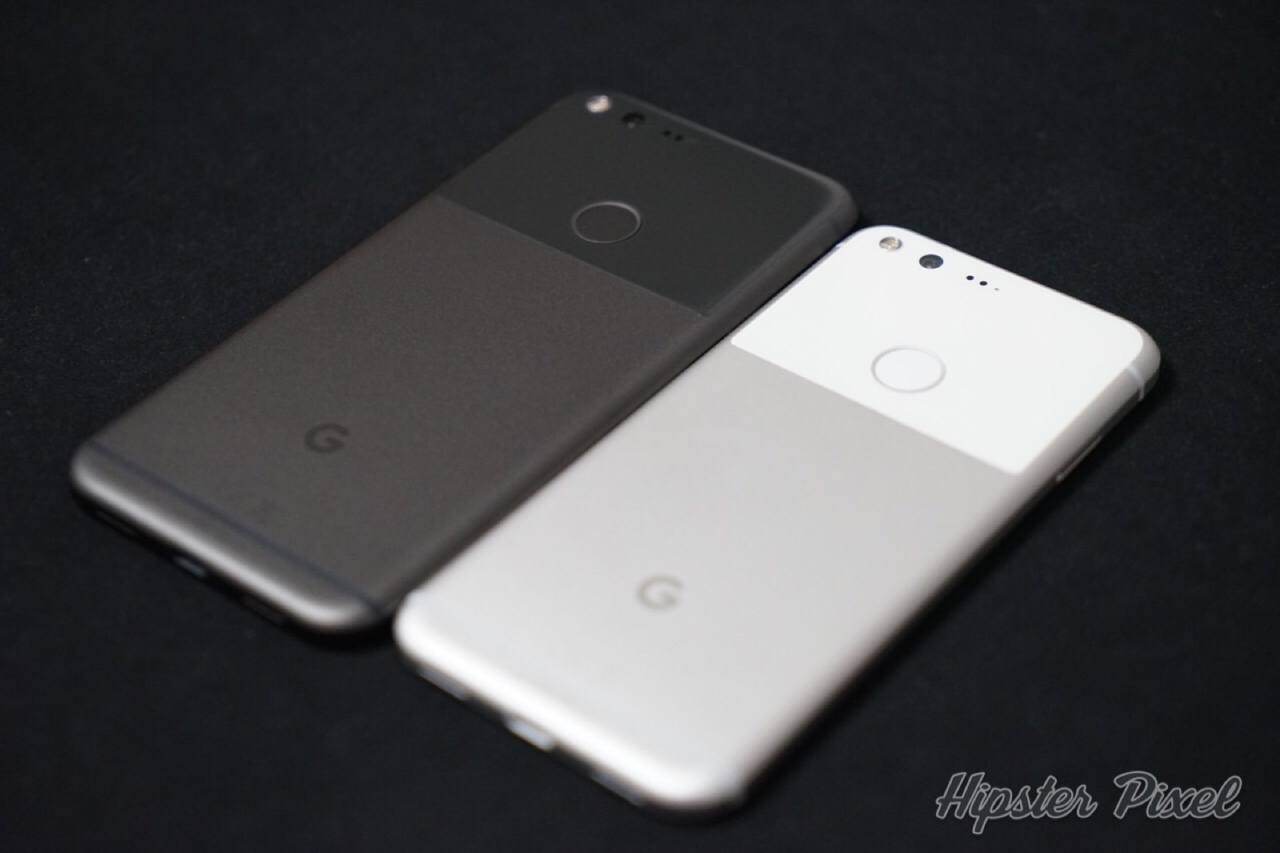 It takes you step by step to transfer your contacts, calendar events, photos, videos, music, SMS, iMessages and event more. And it even instruct you how to disable iMessage to make sure your SMS are properly routed to your new Android phone and contacts stop sending you blue bubbles in iMessage. The process takes you by the hand page by page and for each action, there is a link to an online document with the details and reason for the current step. It’s detailed enough for the newbie, and at the same time summarized enough so that it does not weight for the most techie out there.

The general performance of the device is up to par with every other high end Samsung or OnePlus phone out there. This really feels like a premium phone while at the same time lacking all of the Samsung-esque duplicated apps. You only have the Google stuff in this device for a clean, minimalist phone without any bloatware. 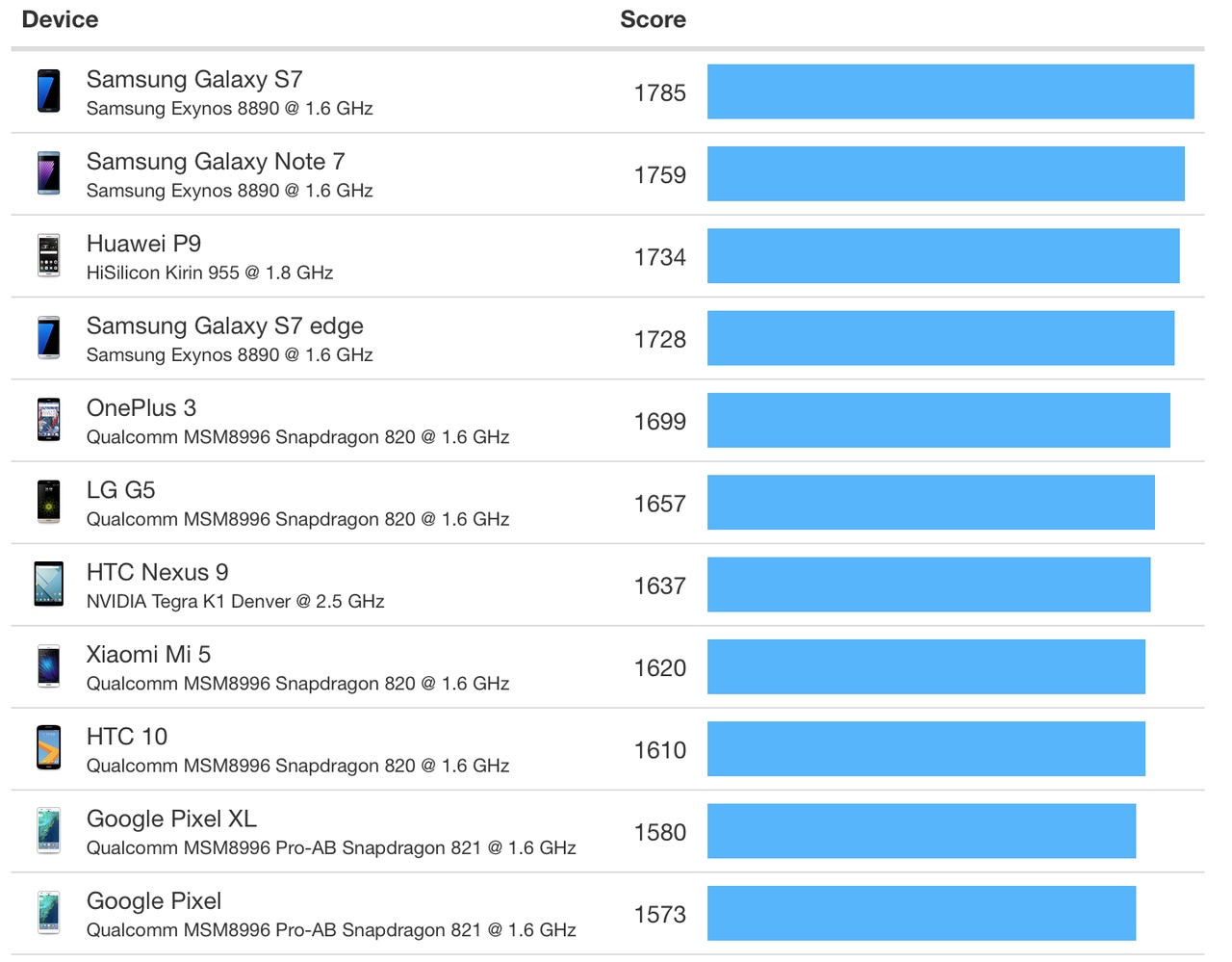 It is not the fastest device when you look at benchmarks, both devices score at around 1580 under the GeekBench 4 benchmark. The faster devices include Xiaomi Mi 5, LG G5, both S7 and S7 Edge and the (hot) Note 7. However, the fastest device, the S7 is only 13% faster in single thread, and 30% faster in multi-thread, than both Google Pixel phones. Given that the single process speed is the one that impact the most the general feeling of speed of a smartphone, it’s not that big of a difference and still in the top of the line Android phones. 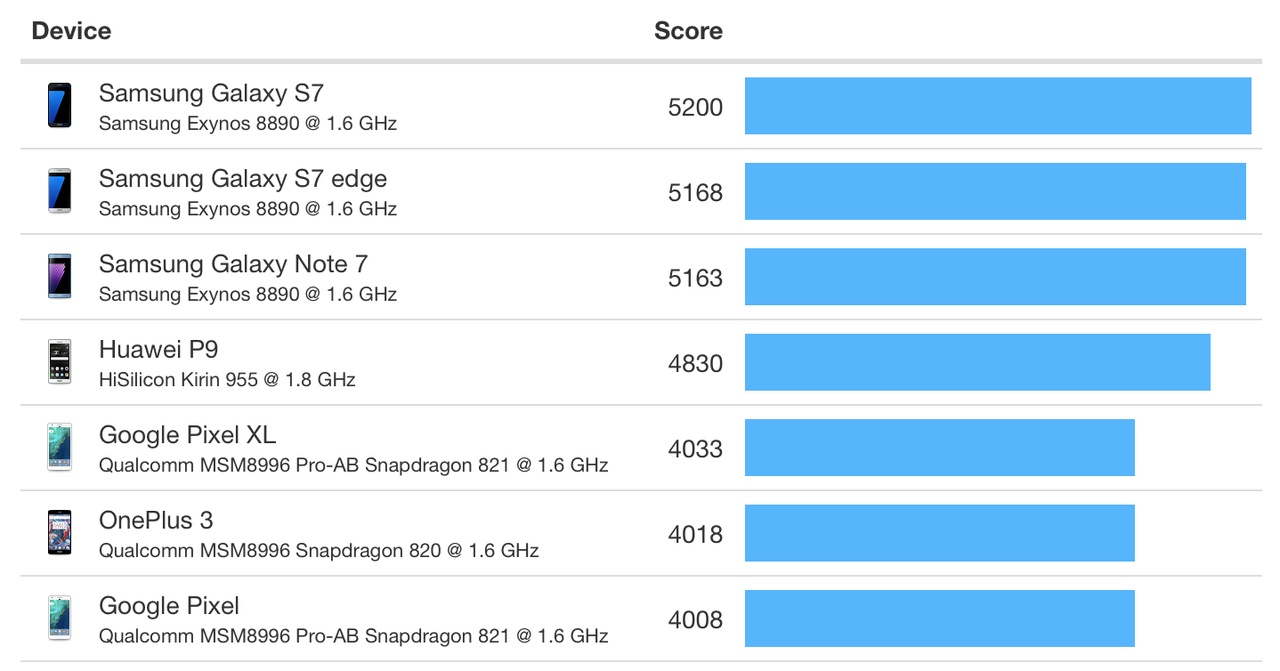 Being a regular iPhone user, I noticed that Android still has issues with the jerkiness of certain animations and transitions. The fastest the device go, the less apparent it gets, but it’s still not at the same level of smoothness as on an iPhone 7 Plus. I read a while back that this is due to main thread not being used for rendering the layout of the screen elements. And to fix it, Android would need to massively rewrite it’s thread model. 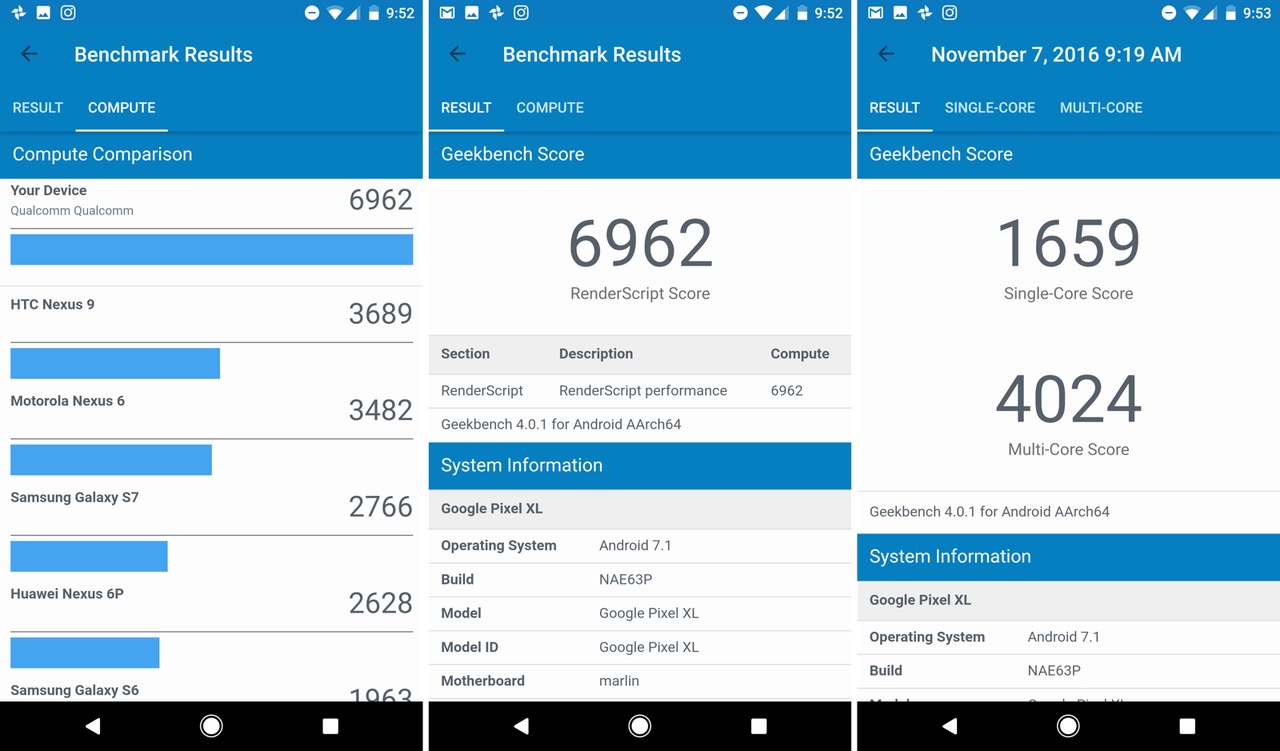 The speaker does an OK job, but now that I’m used to the Baby Pro (iPad Pro 9.7”) and the iPhone 7 Plus, it’s really not as clear and loud.

On many occasions the Google Pixel XL , the one I used as my daily driver, managed to get better photos than the iPhone. But not everytime. It seems that the Pixel might be better in low-light, but the iPhone is slightly better in even lower light. In terms of video color and saturation, the iPhone is the clear winner here. 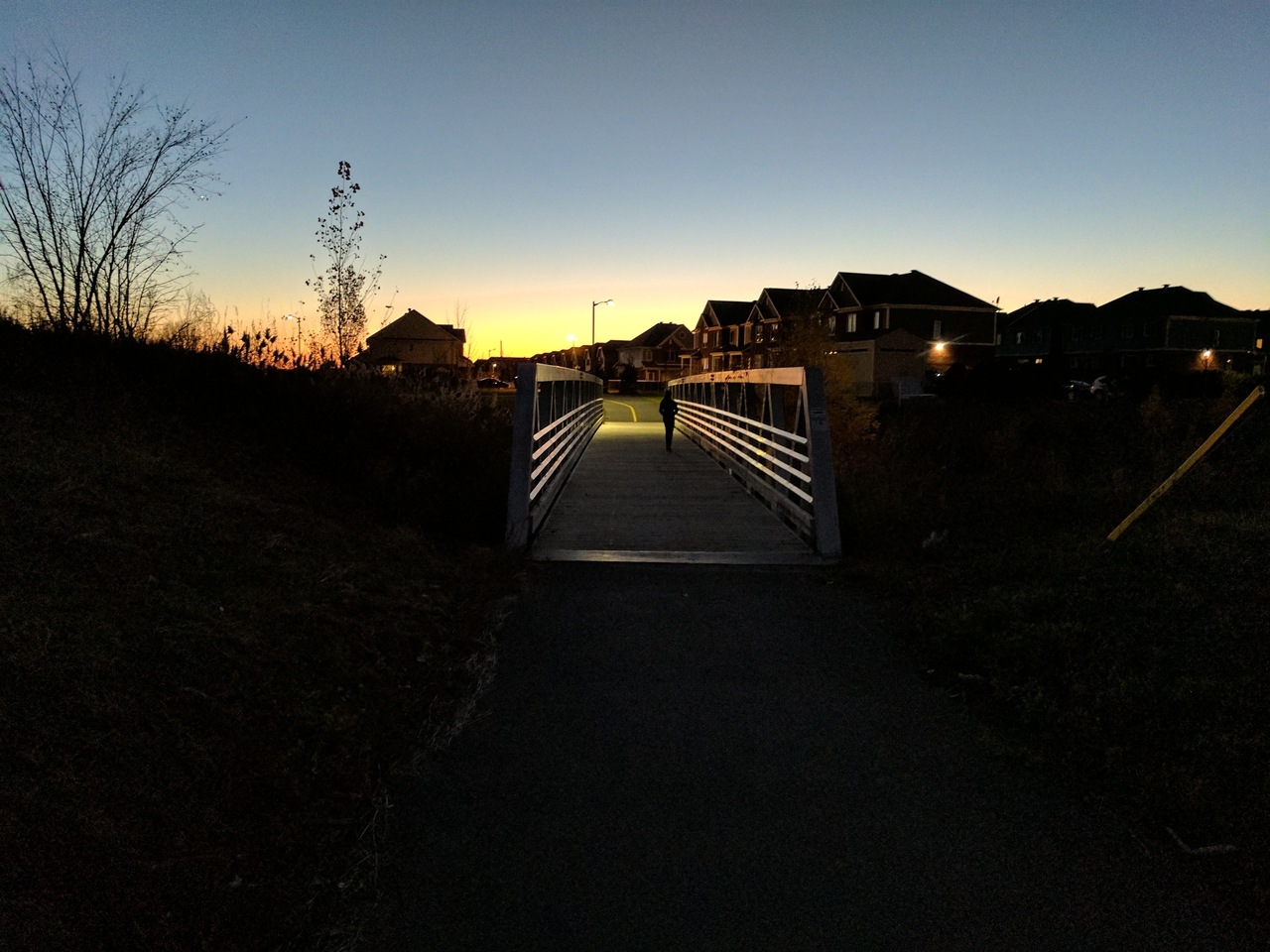 As for the video stabilization, the Pixels uses software stabilization so when pointing your sensor straight ahead it does a better job than the optical stabilization in the iPhone 7. However, as soon as you want to move away from that subject, the camera thinks you are shaking and tries to hold you there for too long, and you get a fast jerky movement to “re-center” the camera. It really gets on my nerve as it’s pretty rare I film a subject that never moves. 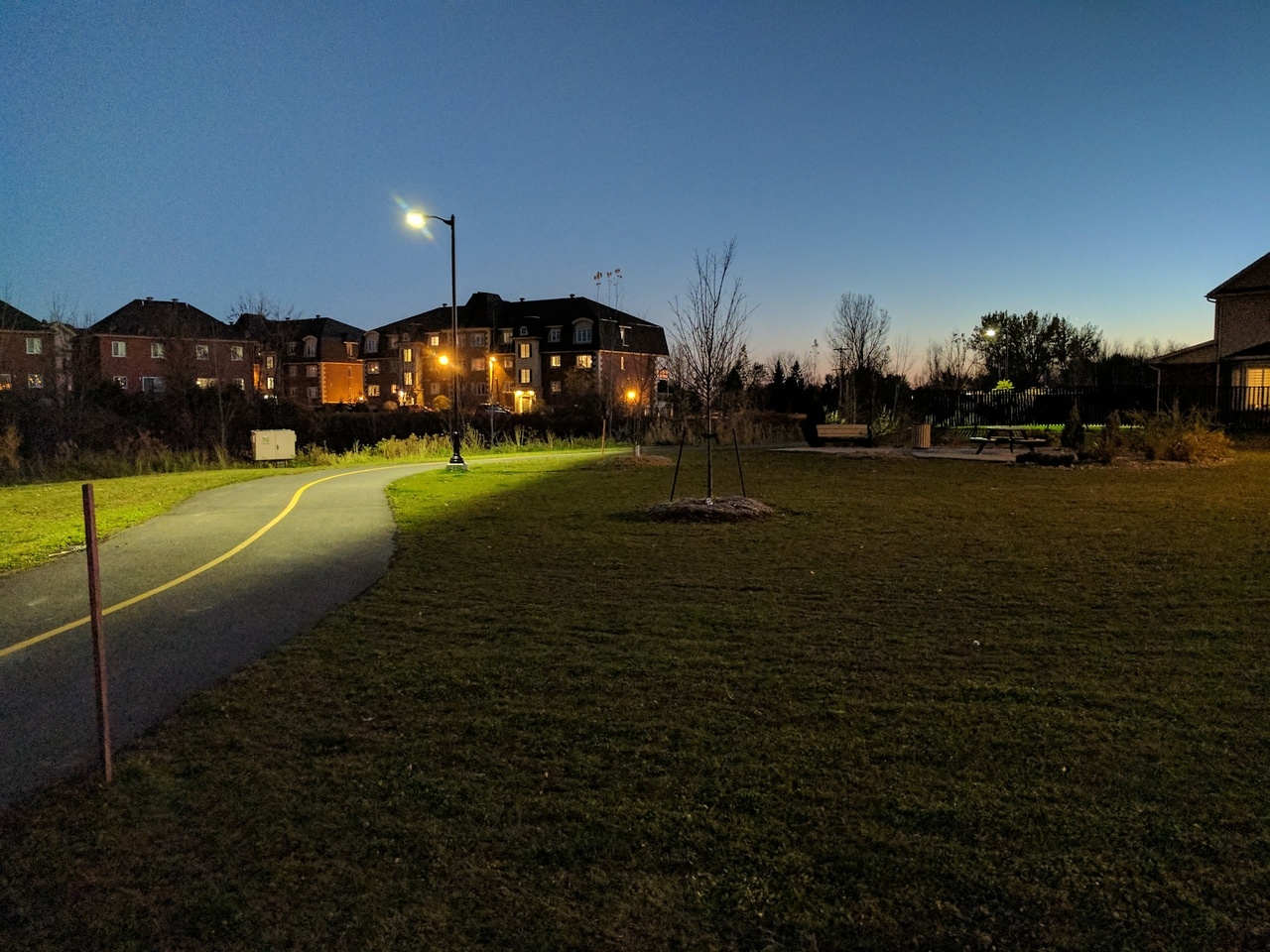 The solution here would be to have a special camera app that includes a button to tell it that you are moving so it follows you while stabilizing excessive movement. Kind of like the DJI Osmo Mobile gimble does it. 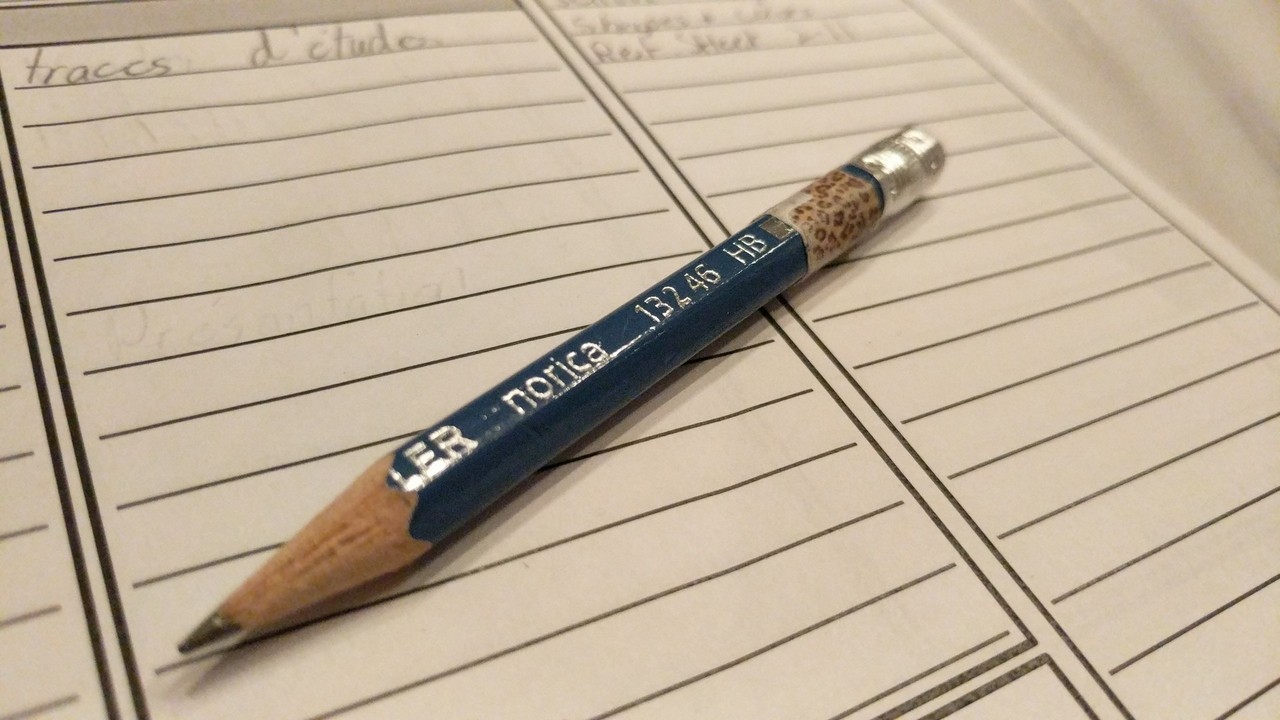 This was something I was not expecting to like. I mean, the back of the phone, what a weird placement for a fingerprint reader!? Actually, it’s the best place you could actually place it! It works as well as Touch ID 2, just a tiny bit slower at times, but it seems to be as reliable. Which is a great think considering not all Android phone fingerprint readers are at this level.

The placement is natural and my finger gently reaches it easily. I still have the reflex to move my grip and hit the front of the chin, but near the end of my test I was getting used to it more and more. Most of the time you do not even need to change your grip to reach it, which is extra points for the Pixel Imprint.

It works very well, although I’m still not used to talking to my phone. Be it Siri or Google, it does not come natural to me. Perhaps because I had so much problems over the last decade with various soltuions going from IBM ViaVoice to Siri and my French Canadian accent that probably throws off most systems.

If that’s the kind of thing you are looking for, I can see why the Assistant is great and often more reliable than Siri in providing accurate information and not just “Searching the web for…”.

Google is taking the premium route with this pair of devices, and not just for the hardware. You also have access to unlimited storage of photos and video in the cloud thanks to Google Photos. This is only possible because Google is charging a premium price and I’m happy they do. This is the kind of offer that will push the competition to do better and offer more with their high end products.

All in all, this is a solid smartphone, it’s also one of the rare to feel premium in my hands without the usual over contrasted screen or cheap plastics. Google took note from the Apple book and that’s for the better. Android 7.1 is a very nice upgrade and this phone benefits from it.

If only the stabilization and camera could be better, it would be quite a serious contender to the iPhone 7 and 7 Plus. Yes, I know about that DxO Mark test that says it’s better, but that’s just plain sponsored content as they still did not test the iPhone 7 Plus. Perhaps because the 7 Plus would get a better score?

Finally a high-end Google Android phones, this is our review of the Pixel XL and the Pixel, made by Google.

The Good Stuff The Bad Stuff
The Ratings
Design
90%
Performance
90%
Screen Quality
90%
Camera
70%
Battery Life
80%
Price
80%
Overall: 82%
Disclaimers: This product or service was loaned for the purpose of this review.
For more information on how we score products, please read how we review products.
The iPod Interface That Lost to iOS, in Photos and Video
Apple Releases New iPhone Ad Centered on Portrait Mode