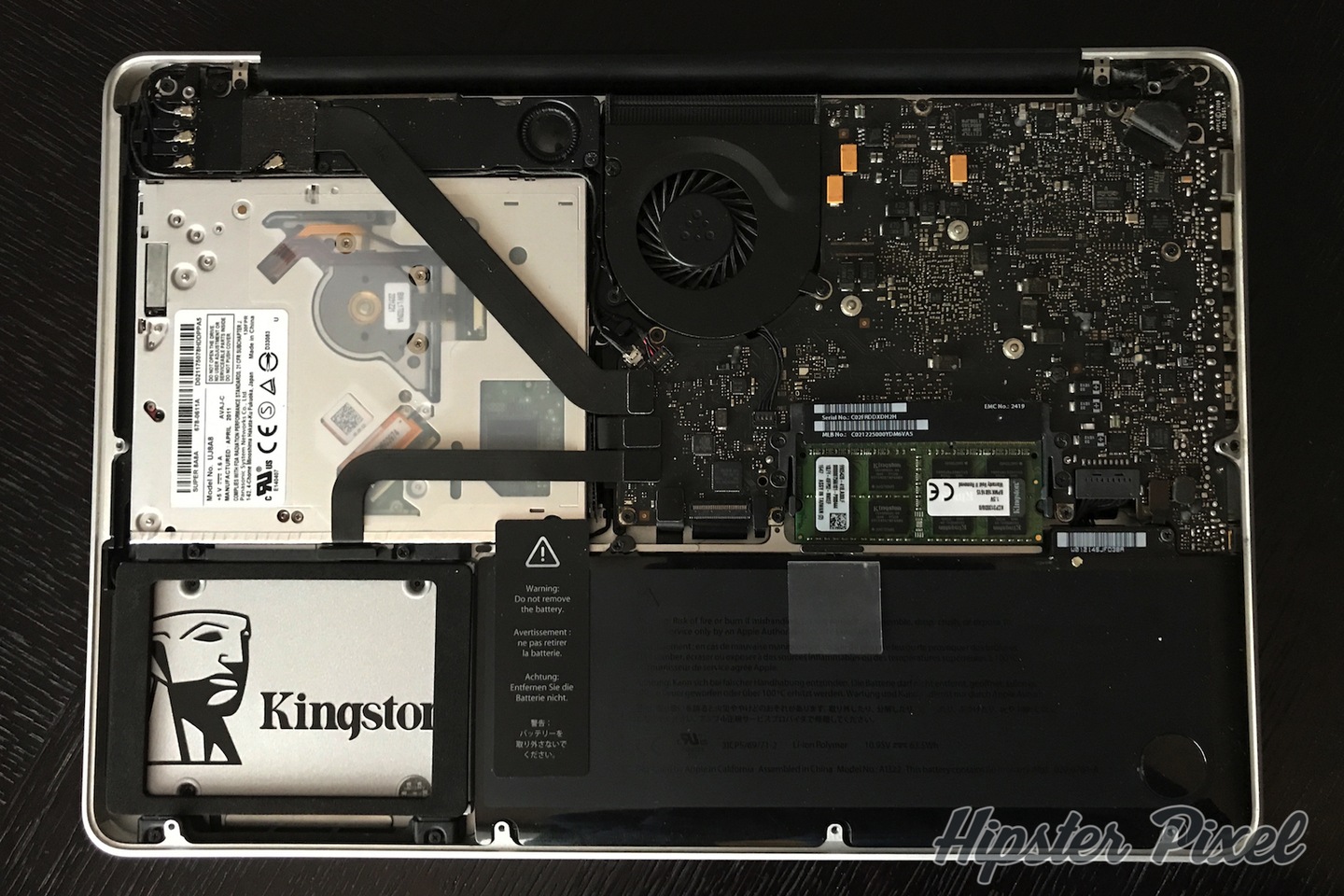 Often we have an aging computer and sometimes it’s not the best idea to simply replace it. If it’s a few years old, chances are you can still upgrade the disk and the memory which will give it a great boost in performance. Depending on your base configuration, it might even take it from barely usable to lightning fast and almost up to par with recent computers.

Tyler has an old faithful <a href=”https://geni.us/BPhA” title=”Buy MacBook Pro 13” on Amazon”>MacBook Pro 13”</a> from 2011. A Late 2011 to be more precise. This laptop came with 4GB of memory and a spinning hard drive. If you do not consider the latest macOS release for which he cannot benefit from NightShift, his computer was still able to be updated to the latest macOS version albeit with some limitation like AirDrop and clipboard syncing not being present. For the rest, it’s still a fully functional laptop that is just in need of a few great touches by Geeks like us.

The board, CPU and GPU are all soldered so we can only update the memory and disk. It’s not a bad thing since these are the things that have the most impact on this kind of upgrade. The challenge with such a computer is to find the best hardware, the fastest one, without diving into features that are not compatible or not supported by the laptop. For example, it makes no sense to get a SATA3 class SSD since the hardware only supports SATA2. Same culprits for the memory, you must select compatible memory going at the proper bus speed and respect the limits of the computer. Two modules of 16GB each seems interesting but it’s not compatible with this computer. Even Apple only maxed out this computer at 8GB of memory.

Looking at devices, specs and all, we ended up selecting the following memory and SSD model that are both pushing the computer to the limit of its performances.

The memory selected is Kingston 8GB, model KCP313SD8/8 , two sticks of 8GB DDR3 PC3-10600 at 1333MHz will be compatible and offer the maximum memory compatible with the system.

The memory is even simpler to upgrade, remove the original memory sticks by losing the side arms, it pops up. Slide it out, and install the same way both new 8GB sticks of memory. 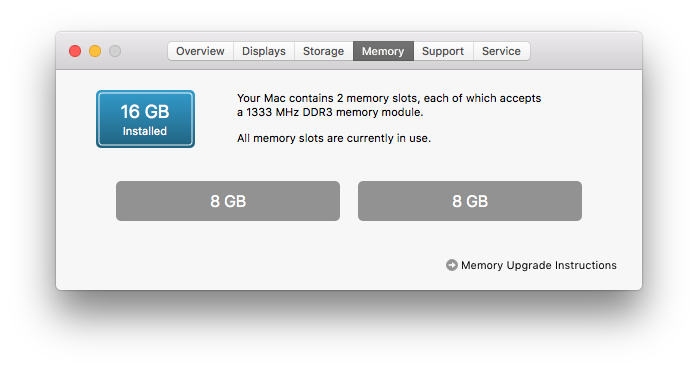 If you need detailed pictures, here are two guides from iFixIt that a marvellous work of visually showing you the steps:

All in all, the whole procedure took about 10 minutes to complete and only required a Philips #00 screwdriver and a spudger to remove the battery connector go get in the case and a T6 screwdriver for getting the hard drive out.

The MacBook Pro Late 2011 had a very nice grin on its face after the surgery and he had a full recovery that only took about 1h. He was then on its feet running around much faster than before the operation! The performance difference was like getting a brand new machine!

Even though Apple says it’s not supported, the 16GB of memory were installed and recognized by the system. And most importantly, used when needed. It has been many years that Apple said that only 6GB or 8GB of memory was supported by such and such system, but a quick Google search proved the opposite. In this particular Late 2011 case, it’s 16GB and it’s fully supported by the OS and hardware.

The only downside of this operation is that the fans are kicking in much faster than before and going full speed for longer periods of times. This has an adverse effect on the battery life, sadly. We also tried an SMC and PRAM reset in case the hardware was not in-sync with hardware changes. We have also monitored the SSD temperature to make sure the Kingston SSD was not giving out too much heat. It stays at a cool 25˚C (77˚F), it’s the CPU that quickly jumps to 90˚C (194˚F) and has the fan run like a kid on a sugar rush.

Sadly, the test machine looks like it cannot handle the sheer performance of the new components, or it’s broken in some other way. Perhaps the CPU heat sink is not doing its job properly and should get a good cleanup and new CPU thermal paste. 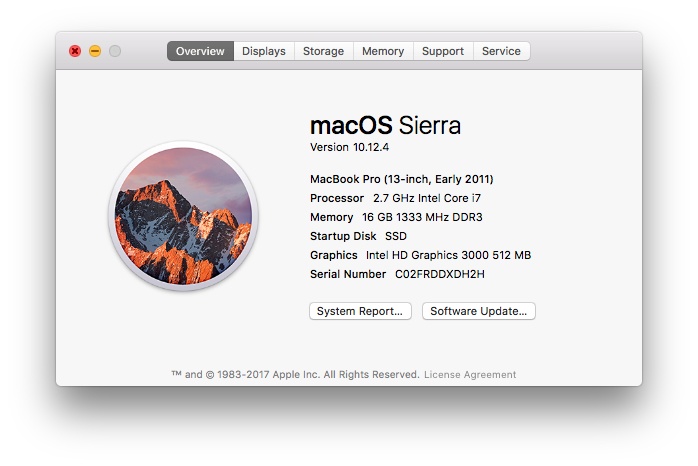 The overall performance has been taken to a level that was never seen by this little laptop. It’s way faster and much more modern feeling. Memory benchmarks do not really give it justice so I’m going to rely on a QuickBench SSD benchmark to give you an example of the speed increase of the upgrade.

Remember that the HDD was going at most at 75MB/s in the best of scenarios. 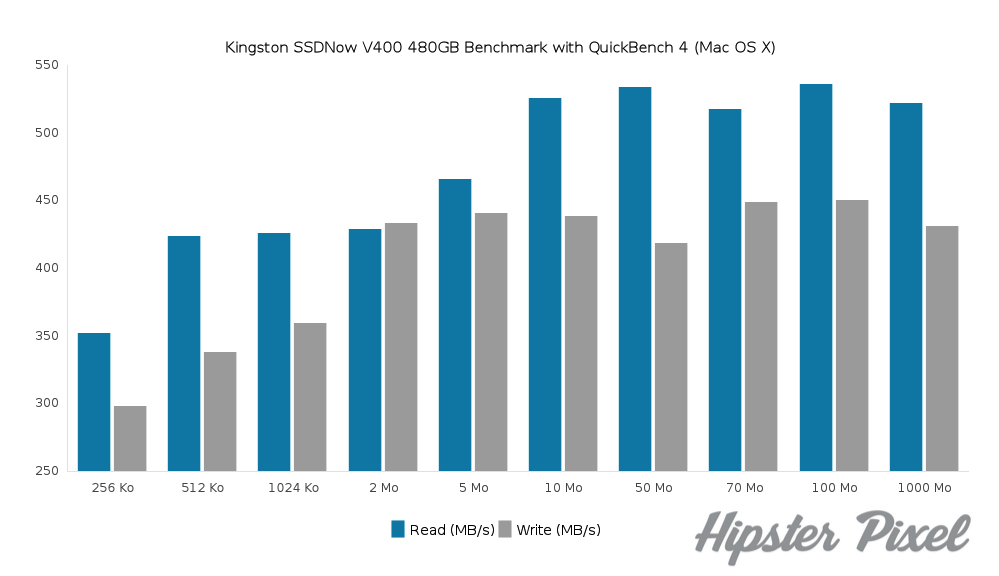 Should you attempt this procedure? Yes! It’s a lot easier than it looks and could be attempted by anyone given that you take your time and be careful. There are no batteries to remove and simply clip in the memory and remove a hard disk bracket. Nothing hard if you have the few tools needed on hand.

Given the performance increase and the cost of the components today, I strongly encourage you to do it since it can give you a few more years of use out of your MacBook Pro from 2011. Or pimp it up and sell it off to buy a great new MacBook Pro with Touch Bar.