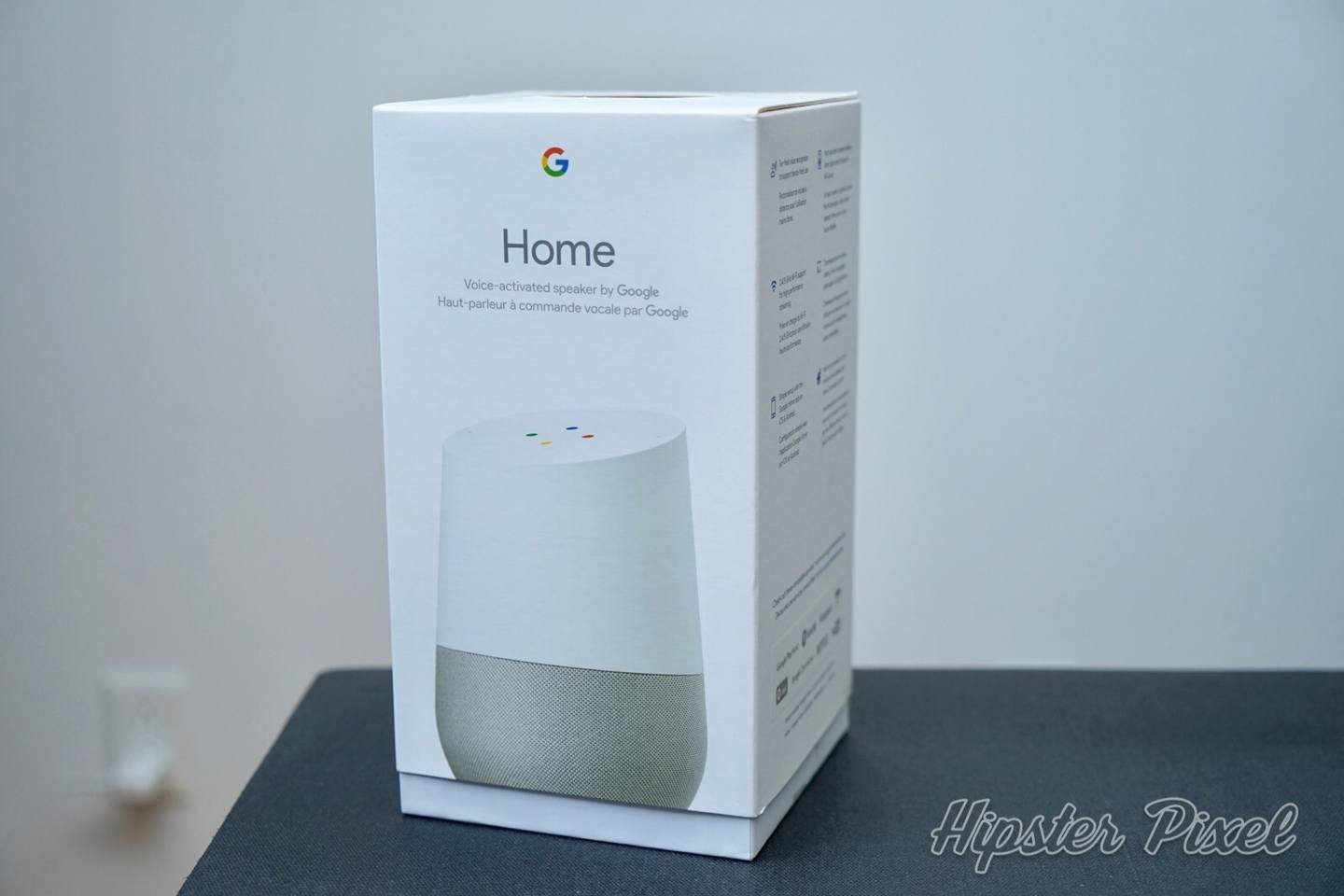 Finally, we have the very first home assistant in Canada. Amazon still has not crossed the border and Siri is only getting a limited release in December, which does not include Canada, so this leaves us with the Google Home. But Google also had a surprise in stock for us. The Google Home comes with a French Canadian voice profile so us Quebecers can be understood much better. It also comes with all the bells and whistles our neighbours to the south have. Is the Google Home a product ready for the masses or is it still for highly involved tech nerds like us?

This one is a bit contentious. Either you love the design or you could not care less and prefer something that does not pop out like the Amazon Echo. But there is also another aspect to consider, the functionality of the design. The Google Home is similar to some air fresheners with a rounded base with a general conic shape with the top cut in an angle. That angled part hosts colour LEDs to give feedback to its users. When using the trigger word, OK Google, it wakes up and give you feedback that it’s listening to you. And then after you say you inquiry, it circles around “thinking” for a response. 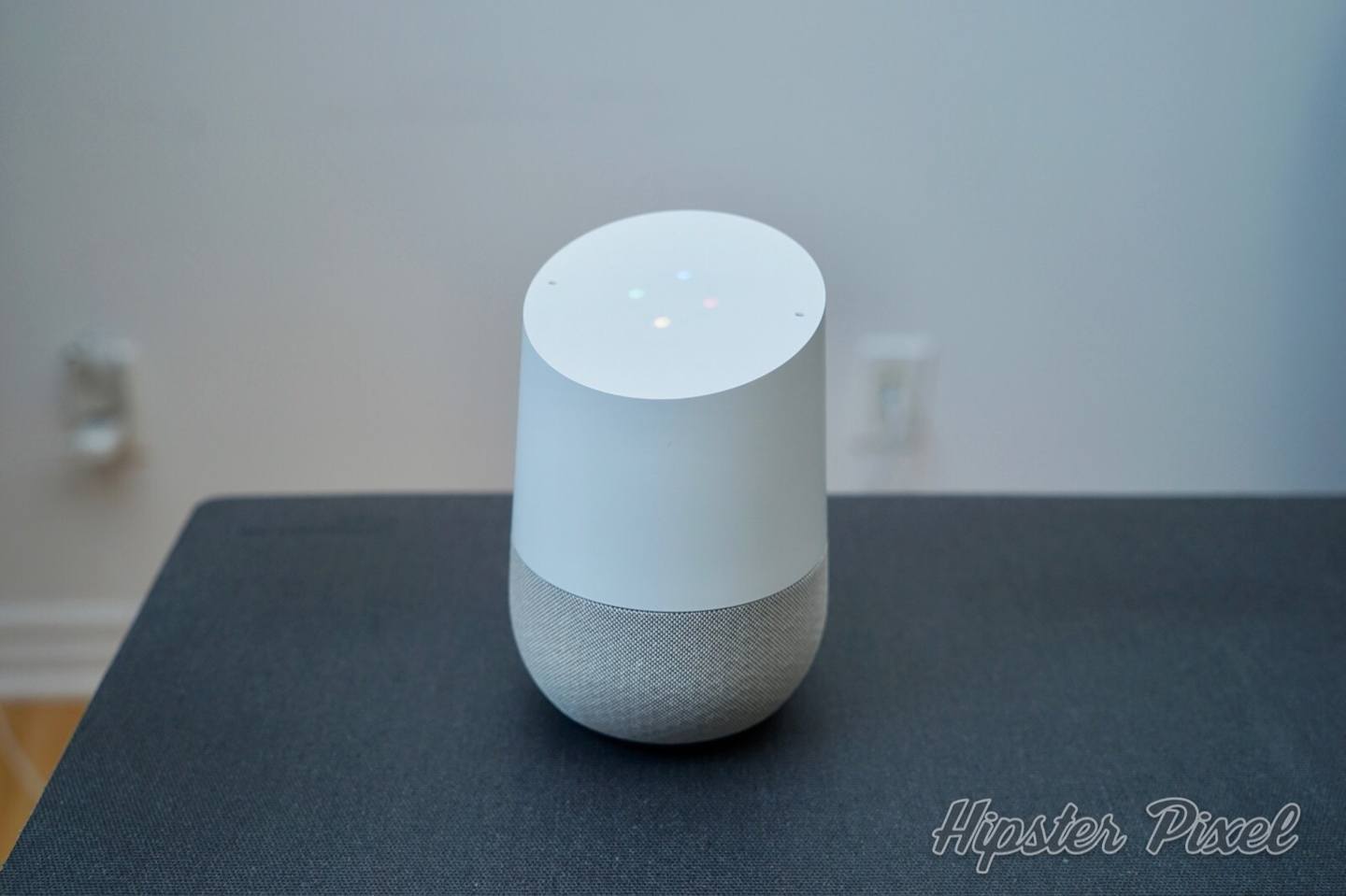 It’s also a touch screen so you can circle around the top with your finger following the LED pattern to increase or decrease the volume. You can also tap to Play or Pause. It serves a useful purpose to quickly pass by it and do basic actions. There is also a microphone mute button on the back for those times when either you are listening to podcast and do not want the trigger word to be heard by the Home or when you are extra cautious about being overheard by the cloud. 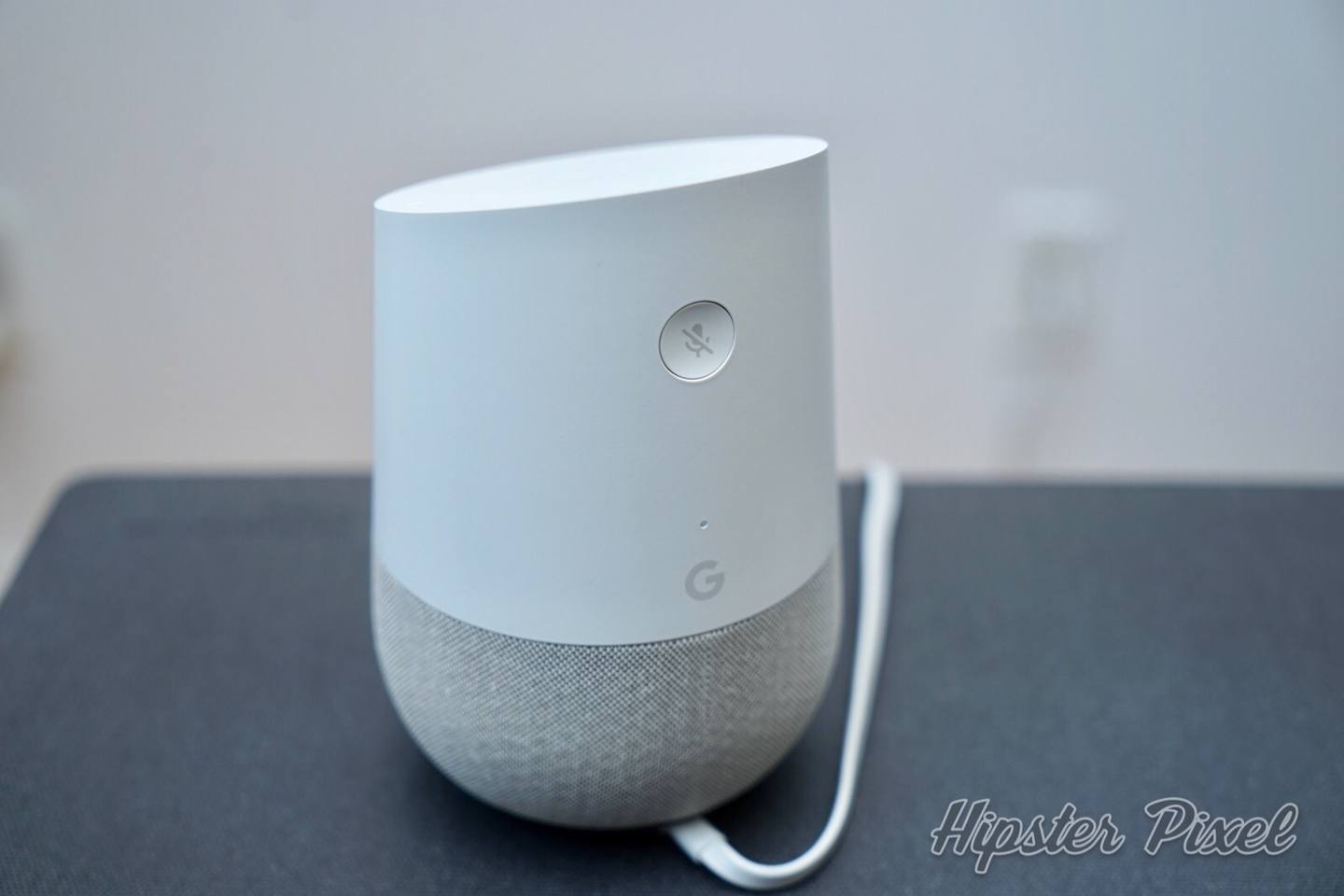 As a curious geek, I had to see what was inside so thankfully the bottom part can be removed quite easily and magnets make sure it gets reattached rapidly and in the proper position. It’s fun to see those many speakers all around the device.

The setup process is very simple and the on boarding gives you examples of queries you can speak to get you started. I strongly suggest you ask away anything you might think as it really can be much more powerful than you can think. Many queries, humanly constructed, that I thought of were well understood by the Google Home.

The one thing that bugged me the most is when the Home seemed to listen to me and using the same intonation I used to trigger it, it would fail silently. Often it would fail with a response that it could not do what I asked or answer my question, but those times where it failed silently I felt very irritated as if I was speaking to a human that did not want to answer me. Weird feeling.

I would prefer at the very least a message that the Home did not understand me.

In terms of performance for the types of queries you would type into a Google Search, the Home is very impressive. It almost always gets it right and always with impressive accuracy. When controlling Internet of Things devices, it is a bit more cumbersome as I have tried it with WeMo devices and I had to mention the exact name to get it to react. Once I got down the exact query I had to voice, it was working very well and much faster than I anticipated. Not instant, but closer to 1.25-ish seconds after it understood the command.

This is where the Home could learn more tricks and have more devices compatible. This is an area where it can grow and given the multilingual capabilities of the Google Home it has a worldwide advantage over the competition.

My final impression of the time I spent with the Google Home is very positive and shows a device with a ton of potential. Would I recommend it to anyone? No, I would not. If you are technical and willing to receive silent errors and get misunderstand a lot, you could try it. However, due to the fact that it’s not reliable enough at understanding kids and many forms of queries, I would not recommend it for everyone. If you are an early adopter willing to compromise, feel free to buy one as it will no doubt evolve and get so much better with time!

The very first Google product entirely powered by voice, the Google Home is a very promising product that has an amazing future cut out for it!

The Good Stuff The Bad Stuff
The Ratings
Design
90%
Setup and Configuration
90%
On-boarding
80%
Performance
60%
Compatibility
70%
Price
80%
Overall: 75%
Disclaimers: This product or service was loaned for the purpose of this review.
For more information on how we score products, please read how we review products.
Last Symphony of the Goddesses Concert Dates Announced
LG G6 Review